Sitting At The Table With Breast Cancer 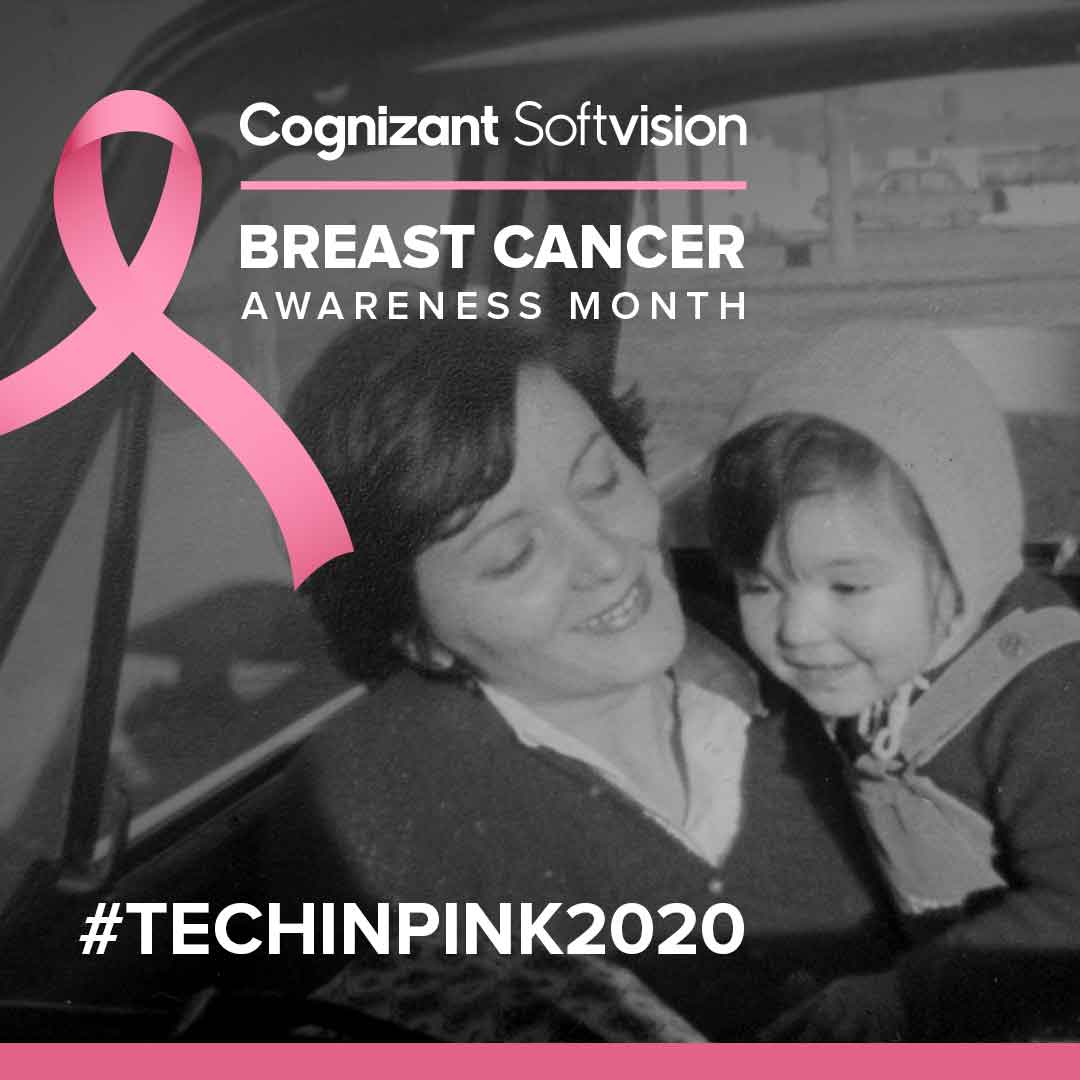 October is Breast Cancer Awareness Month – a month dedicated to providing awareness of the importance of early detection, education and support services for women. As participants in this very important campaign, and knowing that 1 in 8 women will have invasive breast cancer in their lifetime, we wanted to share stories from our own team. Below, Alejandra Albero, a Cognizant Softvisioner from our studio in Buenos Aires, shares her own personal experience with breast cancer and how it affected the course of her life.

The first time I noticed a lump in my armpit I was a teenager. It was 7 AM and I was wearing my school uniform. Immediately, I burst into tears and called my mum. That afternoon she scheduled an appointment with her gynecologist and a week later we found out it was normal – nothing to worry about.

My mother was the kind of person that always believed in going to the doctor – whether that be for checkups or to investigate an illness. She was very well organized with our family health agenda, never skipped a medical study and always knew when it was time for her kids and husband to visit the dentist.

She was always a step ahead.

While her formal name was Noemí, she was known to everyone as Mimí. She was the daughter of a housewife and a tailor, born in a little town in Mendoza, Argentina, and the first woman to break many barriers: attending university, traveling with girlfriends in her own car in the 70’s, flying abroad, and learning new languages. As a teacher, she strongly believed in education. My mother was an independent woman and had her own voice in times when that was frowned upon. She married my father at 28 years old and together they raised four happy children – one of which was me, the oldest.

When she was in her fifties she noticed a little lump on her front chest – it was an eerily similar situation as to when I found my lump as a teenager. Like so many years before, she quickly called her gynecologist. And, just like before, it was deemed to be nothing to worry about. In fact, her mammograms were perfect for the next five years and although she insisted each time for more exact images, her doctor said that everything was in order. When the little lump started to hurt, this time she stood firm, and insisted the doctor take more images.

The results recommended that the lump be removed with the addition of taking a few sessions of x-rays. But, after what seemed to be a routine removal surgery, her doctor entered her room with a worried face and said that chemotherapy was necessary. Although I was 28 years old, I  didn’t realize how serious he was or fully understand what he was talking about.

Soon after, my mother’s health deteriorated abruptly. It was like a nightmare that got worse from one minute to another. She only had time to go through her first chemo and less than a week after, she passed away. She was 57 years old. Up until that moment I had never thought that death was a possibility. But, suddenly she was gone and my life was paused.

Grieving, especially for one of the people you love the most, is like living in slow motion. I still had the ability of feeling joy for my loved ones’ achievements, but just became disconnected from happiness. I was stuck there for six long years, supported by the love and patience of my family and friends, my therapist and my job.

All of a sudden, breast cancer was now part of my medical record. My head was full of questions: What had happened to my mother? How is it that her illness never appeared in any exam? How did I know I wouldn’t go through the same?

In the years that followed my mother’s death I visited many professionals, until I visited a new gynecologist. She was calm and clear: science did not have all the answers, we did not know if this episode was genetic, my chances of having breast cancer were real and, most importantly and maybe nerve-wracking of all, I had to learn to live with this uncertainty. I remember her prescriptive advice: I simply couldn’t stop enjoying life and hide in fear.

Her words were a relief to me and I took them to heart. She also explained that if something doubtful ever appeared on my mammograms it would be millimeter and give us time to act. She was right. In 2017, after paying attention to the behavior of my breast microcalcifications, we decided, along with my mastologist, to advance with a biopsy, which would remove a small tissue from the breast and test it; a procedure that could’ve changed my mother’s destiny.

A month later, my mastologist waited for me at the end of the hospital corridor happily shouting “It’s a success!” and hugged me before sharing the results on his computer screen. That night I was able to sleep well again feeling that my mother’s suffering hadn’t been in vain.

After I heard about breast cancer for the first time in 2008, my life has never been the same. That diagnosis has sat with me at the table ever since – it’s like an uninvited dinner guest that shows up and never leaves. I had to learn to live with the uncertainty of not knowing why and how. Nevertheless, I decided to trust science, more than ever, and visit as many doctors as needed if my body turns on an alarm, no matter how tiny it might look.

I’ve also gained some things too – somewhere along the way I left the strict and serious corporate professional I used to be and turned into the clown of the office. I lost fear of ridiculousness and never let my friends and family go without telling them how much I love them, how important they are in my life and if I’ve hurt their feelings, even if unintentionally, how sorry I am. I didn’t have the chance to do that with my mother and do not want to make that mistake again.

I decided to end my grieving with a huge colourful butterfly tattoo on my back that says Today, a reminder that the most precious time in life is the present. My nerd spirit rebirthed and became keen on reading and sharing science news, I changed my diet and started training three times a week. Moreover, I understood there’s very little I can do to control life. I lost my stubborn pride and became a more tolerant and imperfect but confident human being, always learning and never missing a medical appointment.

As a journalist, I committed myself to share my mother’s experience, just like I’m doing on this article, to raise awareness and put a face to something that might look unfamiliar like cancer. I lost fear of talking about illnesses and diagnosis at the office and let people freely ask their concerns about my personal experience. I’m always surprised at how many men do it. I like telling them that love is also the synonym of having a partner that takes care of your health, like my father did with my mother.

October is Breast Cancer Awareness Month and I already made an appointment for my annual check up. I challenge you to do it too and to make a friendly reminder to all women around you. It’s always the right time for prevention, to get plans into action and to start enjoying Today.

And that’s probably the most valuable gift my mother’s cancer experience taught me. 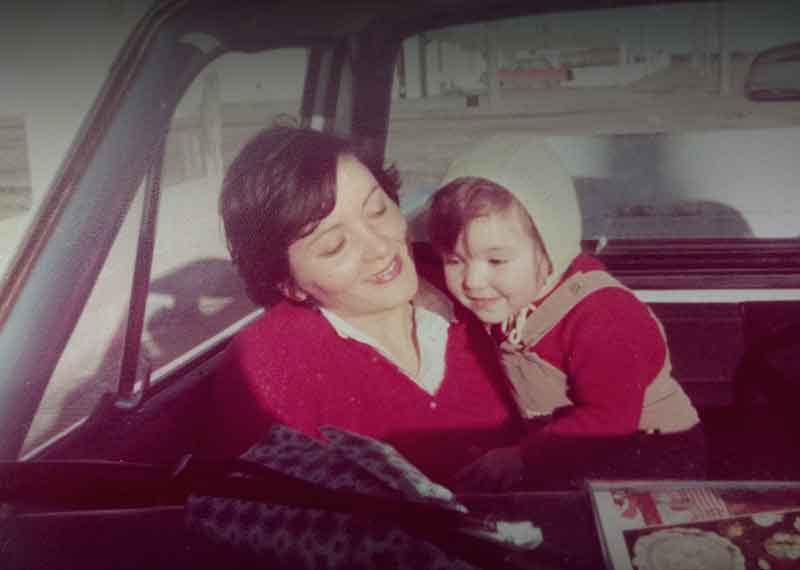 05.How to Utilize React Router in ReactJS Application