No One’s Going to Speak Your Mind for You 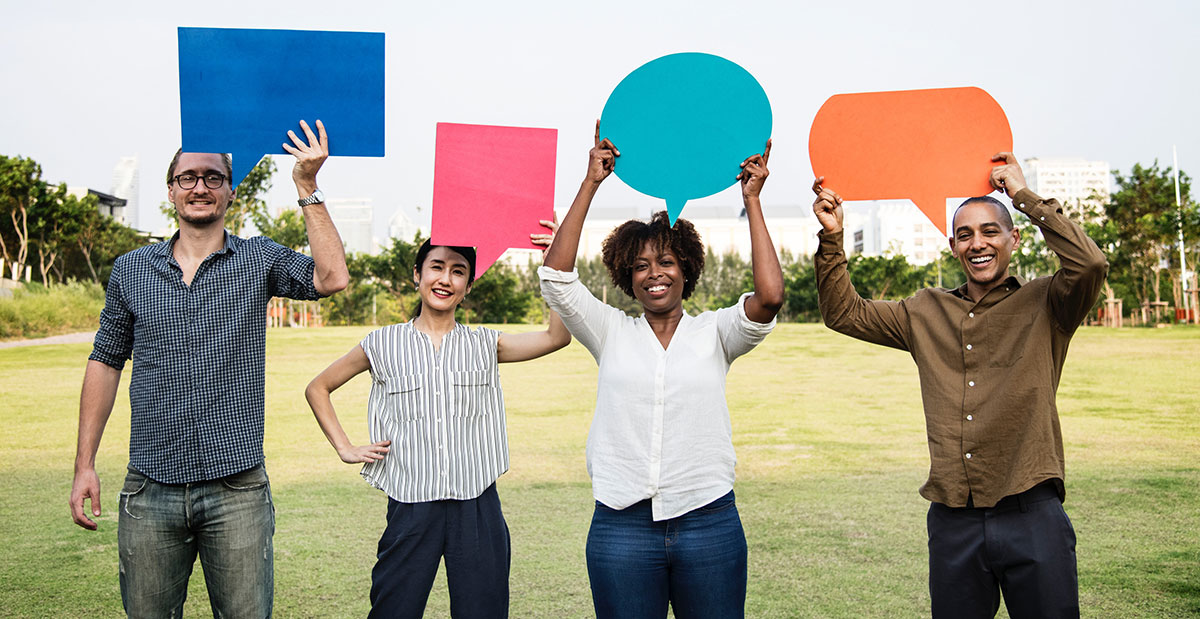 As individuals develop and become professionals and experts in their various fields, they start facing situations that will make them step outside of their comfort zone more frequently. This is a natural progression that everyone should go through.

To me, this natural progression started happening a couple years back and it’s and it is an ongoing process. My coping mechanism, when faced with the need to push my boundaries, is to break them, rather than pull back. This means putting myself so far out there, that I can’t come back quickly and I have to figure out other ways to make it.

One type of situation that I put myself into voluntarily is public speaking. I’m sure this is a fear many people have and one of the most challenging things I personally have ever had to do. I have done it in the past and with some success, but for some reason, before I have to hold a presentation or speak in front of a large group of people, I always get anxious, and have a “sweaty palms-knees weak-arms are heavy” type of feeling.

The way I get through that and evaluate my performance later, is by talking (or writing) about it. In other words, communication.

Earlier this year, I gave a presentation focused on communicating (or the lack of) at Codecamp Cluj, one of the largest IT conferences in Romania.

Time and again, managers and leaders, in general, are faced with having to make decisions with little information to back them up. This is something we get used to and end up doing it pretty confidently on a daily basis when it comes to running our projects. However, doing the same when people are involved is a much harder task and one that allows for very little wiggle room. At Codecamp I shared five stories that created difficult situations for me in the past. Some were resolved, some are ongoing, but all are very good learning experiences. 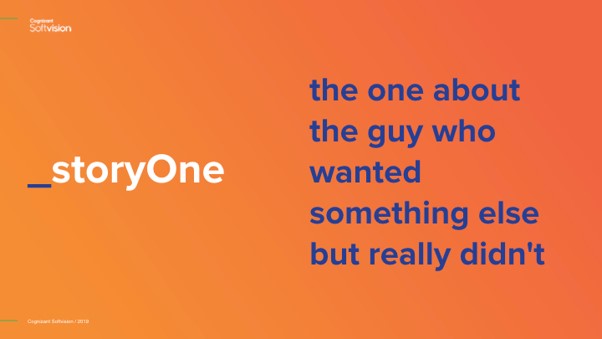 One of the challenges I face on a daily basis is finding a good match between what people want, what I want, what the project needs and what people actually have skills for. It’s not easy and it’s even harder when people are not upfront about their expectations. This means I have to work on assumptions which may not always be accurate. If someone tells me they want something, I’ll hold them to it and plan things accordingly. If they change their mind and don’t tell me, I’ll go with the original plan which may not be in their best interest in the new context.

When this happens, I fall back on my negotiation and persuasion skills and if I’m successful, that person will end up following the original plan. Based on their new reality, it’s not what they want anymore, but they will do it anyway. And that’s bad for them, it’s bad for me and it’s bad for the project.

Bottom line: Speak your mind and tell your leaders and managers what you want. Be honest and upfront because that is the only way you will ever get the best possible outcome.

Audience reaction: The audience enjoyed this story and agreed with me on the conclusion. They were particularly vocal about how being upfront should come as early as possible in the discussion and should not be left for later and used as an underhanded negotiation tactic. 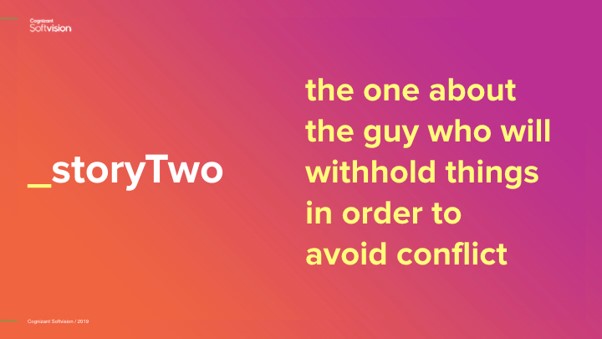 There are people, leaders even, who will go to great lengths in order to avoid conflict. Unfortunately, this may mean that they might not share the whole problem or minimize parts of it. At their worst, they table the problem altogether and pretend it doesn’t exist.

One particular experience I had was when people on one of my teams did not use their time efficiently at all and ended up procrastinating for long periods of time. They still delivered what they were supposed to, but instead of using the extra time to their advantage and furthering their skills and knowledge, the spent it in an unproductive manner.

Any leader who turns a blind eye to this behavior is doing a disservice both to himself and to his team. It really doesn’t benefit anyone.

Bottom line: Always be upfront about issues within your team, confront them and figure things out. If someone can do more within the same amount of time, help them figure out how to do that and become better professionals.

Audience reaction: The audience at Codecamp was split about this story. On the one hand, people understood where I was coming from and agreed that people should push themselves and try to become better every day. On the other hand, they said that as long as they do what they’re supposed to, they should be free to do whatever they want with the leftover time. To me, meeting expectations is almost always insufficient for a satisfying career growth and the way I see it you should always strive to exceed them. What do you think? You can share your thoughts in the comments section below. 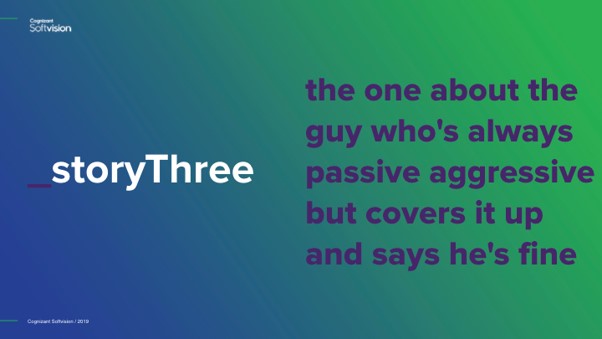 For the most part, I think people don’t feel uncomfortable talking to me. With most of the people on my team, I think I have great communication. There are a few people who will not share their wants and needs for varying reasons. When confronted, nine out of ten times, they will say they’re fine, but their actions and behavior will show the exact opposite.

At one point during my career, I noticed one person in particular who was doing a lot of things that didn’t make any sense. He would not overtly challenge his team leader, and he would not do obvious things out of spite. But he started behaving strangely for a senior person. He would not keep his team leader looped into things that they absolutely should have been, he would not offer support for team members that were junior to him, he would sometimes mope around and generally have a bad attitude, and the list goes on.

Bottom line: Say what’s on your mind and let people know if you don’t like something. Be honest and straightforward and own what you want.

Audience reaction: The Codecamp audience members suggested that the problem was that the person didn’t like what he was working on and wanted a change. I don’t believe that to be the case, as I had offered him various other opportunities and challenges. At the same time, if he wanted a change he could have forced one to happen, which he didn’t for a very long time. As I’m writing this, I still don’t really know what’s going on, but I am determined to one day get to the bottom of it. 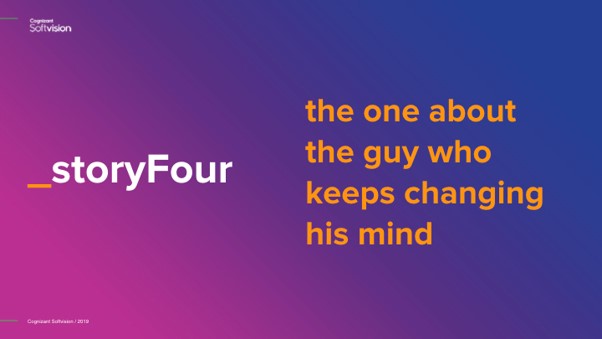 Being mediocre at a lot of things at the same time is a trait that no one wants to have, and a state most would prefer to steer clear of. Now when I say “mediocre,” I don’t mean bad. I just mean good enough that you can do a task, but your work needs to be verified by someone else. When you are faced with a person who fits that description, it can become very frustrating to find a solution.

I once had a team member who would keep switching between things they wanted to do. They wanted to do everything at the same time and, but they were inconsistent in what avenue they wanted to pursue. They would also make the mistake of comparing themselves to their peers and would always somehow come up short. But the biggest problem was that all of this was kept internal. That person had a very hard time sharing everything that was going on with his team leader.

Bottom line: Figure out who you are. If you can’t do it by yourself, don’t be afraid to ask for help and work things out. You should try to be the best you can, pick what you’re best at and develop your craft.

Audience reaction: The people in the audience were almost 100% in agreement with me on this one. I could even see that there were a few of them who may have recognized themselves in this story. 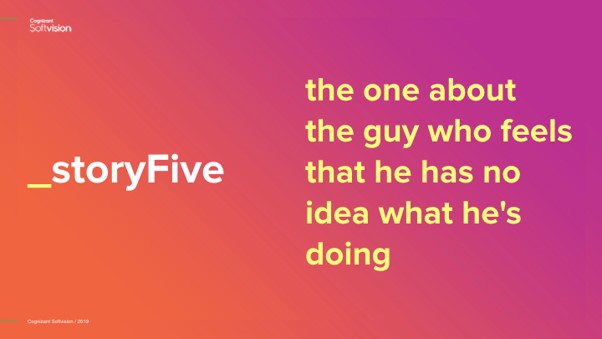 So here’s the thing — there is a person on my team who is very self-motivated. He has always been this way and this helped a lot over the years. He was always interested in knowing more, learning more, doing more and just basically putting himself out there and seeing what happens.

Another thing worth mentioning is that this person has a very small comfort zone. There are very few things that he does that he’s actually comfortable doing. Most of the things he needs to do, however, pull him very far out of his comfort zone.

I’ve talked to this person about his internal struggles and his doubts and questions and I don’t really think I was able to give an answer that would satisfy him. To me it’s obvious that he never would have reached his position if he didn’t actually have a certain set of skills, if he wasn’t actually good at the jobs he’s been doing, right?

Bottom line: Find someone you feel comfortable with to open up to and do it. Everyone has self-doubts at some point, but it’s important to not let that take over.

Audience reaction: The audience at Codecamp Cluj paid very close attention to the story. It was the longest of the five and it was the one they had the most follow up questions on. Most of those who asked questions also admitted that they had been in the same shoes as the person in my story.

After wrapping up my presentation, we had a Q&A session that lasted well over 20 more minutes. It was interesting to me to see how the audience connected to each story individually, to all of them as a whole, to me as a speaker, and to me as a participant in all stories. I could see that some people were on my side, while others saw things completely different. And that’s what I was going for. It’s also the final bottom line for speaking your mind:

I don’t need or want you to agree with me. I want you to be honest and say what you want to happen. At the end of the day, I’ll do my best to make things work for you. And so will your team leaders.