Is BDD worth the overhead? 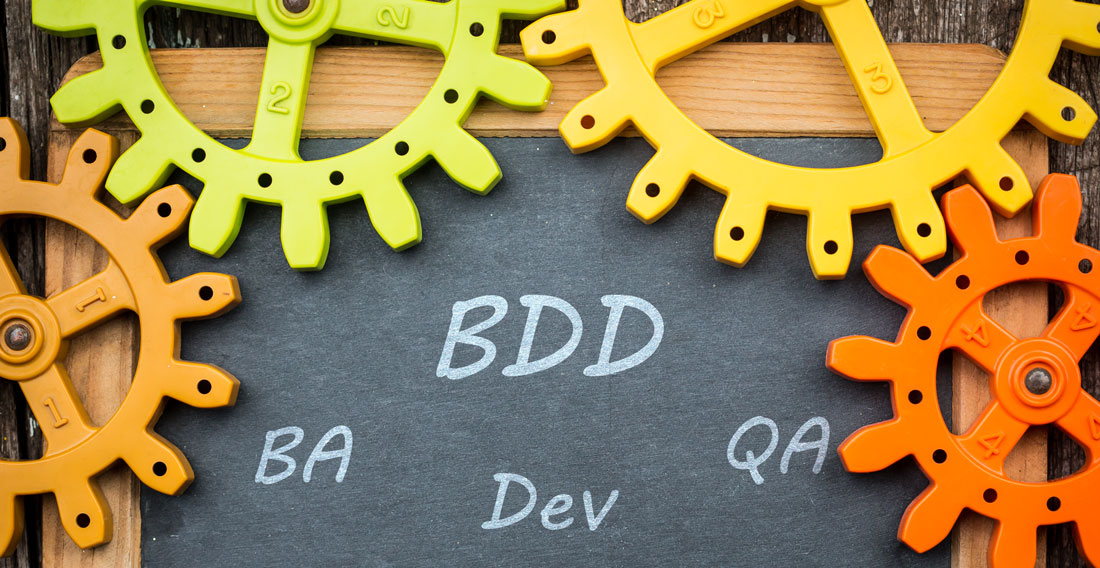 Many years ago, during a training class, I heard about Behavior Driven Development (BDD) for the first time. I remember like it was yesterday, after listening to the trainer’s explanation, my first reaction was: “Is this really used in practice?” In my mind, I thought that BDD was another process created to bring more overhead for the team. I said to myself that it will not be worth the effort (versus its benefits) and I will not use it in any of my projects.

Years later, after I used it in a real project, I realized that BDD comes with a lot of benefits.

BDD is not a new concept for 2021. Most organizations have adopted BDD as the most effective way to translate business requirements into good software. But, before going to the benefits, let’s break it down and first see what BDD is.

So, what is BDD really?

BDD is a software development process. It starts with creation of simple scenarios about how an application should behave from the end user’s perspective. Behavior Driven Development, or BDD, is a branch of Test Driven Development (TDD). As a difference between BDD and TDD, we should bear in mind that in BDD we ensure we build the right things while in TDD we build the things right.

The general principles of BDD include reframing tests as descriptions of system behavior. “When I do one thing, I should see this result.” Over time, the use of BDD shifted toward Gherkin, an English-like language parser.

Gherkin is the engine behind the scenes. Using Gherkin it’s possible to use a human readable format to create tests. It’s also possible for non-technical staff to create descriptions of system behavior. Any programmer or automation tester can transform these descriptions into automated tests and unit tests.

The goal of implementing BDD testing is to improve collaboration between key stakeholders, such as developers, testers, product managers/owners, and business analysts. You achieve this by writing test scenarios in a decipherable language – Gherkin.

To deepen our understanding of BDD, let’s discuss a little bit about the three main ‘key pieces’ of BDD: the artifacts, the domain language, and the process.

When people talk about BDD, they tend to focus on the artifacts. The artifacts are an innovative way of expressing requirements and tests at the same time, using Gherkin syntax.

When people say “BDD” today, they usually mean Gherkin and the use of given/when/then/and/but keywords to describe acceptance criteria.

(1) serving as project’s documentation and

Gherkin is a line-oriented language like Yaml or Python. Each line is called “step” and starts with a keyword. Tabs or spaces are used for the indentation and any comment is preceded by a hashtag (#).

Feature: Title of the Scenario

Given [Preconditions or Initial Context]

When [Event or Trigger]

Here are some examples of the Gherkin language for a simple Login behavior:

So that I will be able to access the application

Given I am on the home page

And I open the login screen

Given I am on the home page

And I open the login screen

Then I should be logged in with correct user

A Gherkin document has an extension (.feature) for writing the tests.

As you can see in the examples above, the behavior description begins with a story called “Feature”. The features are defined using terms from domain language.

Each “Feature” contains one or more “Scenarios”. The Scenarios described above look like plain English, but is it actually a grammar that can be transformed to call software code.

Once the team agrees on the text, a programmer or an automation tester can use some tools to transform the near-English text into stub functions, like in the following example of real C# code:

Then, the programmers or automation testers fill in the step definitions. The scenarios use these functions/methods. Once a full reasonable set of steps exist, any member of the team, technical or non-technical, can create new scenarios. Creating a new scenario could be 80-100% reuse and 0-20% new code. Both tests, from the example above, will share common steps.

The artifacts are powerful as principle, but they don’t drive development without real process change.

The domain language is the language of the business – customers, books, orders, catalogs, invoices, etc. We can think of orders, for example, as an object, with data like: order number, customer, due date, created date, items, and so on. Orders can also have actions, such as receive payment.

Combining domain language with the artifacts makes a powerful combination. The code will be more clear, shorter, and easier to reuse.

The story template and Gherkin are the artifacts, the permanent record.

The process is a collaboration between development, test, and product owner, sometimes called the three amigos. The BDD process moves through three phases: discovery, formulation and automation. The acceptance criteria are transformed into acceptance tests that are later automated. 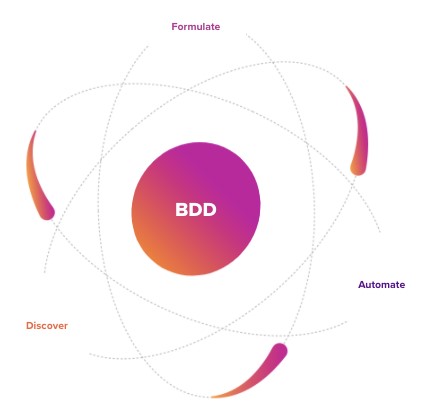 The goal here is to:

Simply stated, instead of one person working alone to create a given/when/then/and/but, the team comes together to discuss what the software will do.  These conversations create a shared understanding. All roles in development can contribute to the work. The programmer needs to understand what to build. The testers can ask powerful questions to make sure the behavior described matches the intent. The product owner, analyst, or business person can use the process as a second-check, to prevent building the wrong thing.

Next step is to start creating the automations tests based on the behavior agreed upon. To support regression and continuous delivery, tests should be automated wherever possible.

In development, the practice is to define the feature BEFORE writing any code. This ensures you’re building the right thing—nothing more and nothing less.

The artifacts, the domain language, and the process put together creates a combination that is much more than the sum of its parts. But, without all three of these pieces in place, attempts to “do” BDD will tend to fail.

There are a lot of frameworks on the market like: RSPEC, EasyB, JBehave, but the most popular is, by far, Cucumber. There are Cucumber implementations in about every language you would care about like: Java, Python, C++, .NET (C#, F#, VB.NET), Ruby, PHP.

Here you can find a list with all Cucumber implementations:

They recommend choosing an implementation for the same platform or program language as the production code. Please note that not all these implementations are officially hosted under Cucumber. Some of them are semi-official, unofficial and even unmaintained. You will see on their page the differences between them. This will help you to make an informed decision when you choose one of these for your project.

Currently, for Automation testing, the most used implementations are:

There are some slight differences between these implementations, in the ease of using them in the IDEs, but the idea behind is the same. All of them are using the Gherkin syntax.

Here you can learn more details about the Gherkin syntax:

To improve readability and flow, the used keywords were translated in 70+ languages including some Emoji(em) or even Esperanto(eo).

(Well, I’ve never seen Emoji or Esperanto used until now, but, who knows, maybe they are).

So, what can BDD do for you? Why adopt a new process with a new framework? Is it worth the effort? I mean, why change the way you do things in the project?

From my experience, I can say yes, it is worth the effort. Why? Because the main benefits of BDD are collaboration and automation, But besides these, there are also some other awesome benefits using the BDD like:

The more I think of BDD, the more I like it because it will enforce a quality-first and test-first mindset which is missing from a lot of projects. Quality becomes the responsibility of all the people involved in the development process. This will have a huge positive impact on the project. Developers and automation testers will think twice before writing their code. They will always start with “What’s the simplest thing that could make this test work?” which automatically helps them to write simple structured designed code. Too many developers don’t see the added value of this technique and/or don’t believe it works. But I say that until you put your hands and try it, you will not see the benefits and you will not understand it.

BDD and TDD are, in a way, psychological methodologies for enforcing people do the right thing in the right way when developing an application.

What they say is true: you DO get addicted to that nice green bar that indicates that your tests all pass. You want that color to be as green as possible, you want it always green, you want it to run as fast as possible, so you can quickly see it’s green…

Are there any challenges of implementing BDD? Yes, there are, and it all starts from the mindset and from the desire to implement it or not. There are a lot of advantages to this methodology, but there are also a lot of challenges you can encounter during the implementation. What is good is that if you truly understand the benefits, you will find a way to overcome all the challenges.

In summary, remember that the way BDD works is when all pieces – artifacts, process, and domain language come together. If one of them is missing, then you will not be able to see the BDD implementation benefits and most probably the attempts to introduce BDD will fail.

BDD is a powerful approach. In the right hands, it can make your customers happy by implementing exactly what they need and save your project a lot of money. However, BDD can be hard to adopt, because it requires changes to all levels.

The main prerequisite of BDD is having realistic expectations. Don’t expect to fix all your problems immediately.

This is a journey with a lot of challenges. While there are many success stories of teams that have implemented BDD, there are also many teams that have failed with BDD.  Therefore, before starting this journey, a mitigation plan will help you to act and overcome all the difficulties before they have the opportunity to derail your well-intentioned BDD efforts.

There’s no doubt that the mindset shifted to quality-first and test-first that comes from following the BDD approach can have many benefits over time. The benefits listed in this article will hopefully convince you of that.

BDD is helpful, just try it and you will see all these benefits soon!